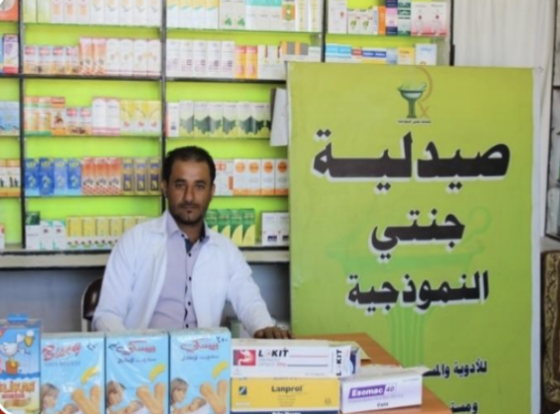 When I joined YEFE, I was looking for a job. Now, I am offering a job in my own pharmacy

Upon graduating high school, Abu Bakr Fuad Alkubati knew he was more interested in studying information technology than medicine. However, Abu reluctantly enrolled in pharmacy after his father convinced him that medicine was the natural choice for a university degree–even though the job prospects after graduation were unknown. In 2014 he received his Bachelor’s, not fully convinced that his career path was the one for him.

Abu looked for a job for a year before hearing from a friend about Yemen Education for Employment (YEFE), a local non-profit dedicated to linking unemployed youth with training and job opportunities. YEFE was offering a healthcare training and placement program through the U.S. Department of State’s “Capacity Building for High-Quality Growth” project. Abu applied for a class in Sana’a, hoping to gain skills and an eventual job placement.Soon after the courses began people around him began to notice that he had become more optimistic, responsible and ambitious. Something unexpected had happened –Abu had begun to enjoy pharmacy work. “I learned at YEFE that job is not just a place where you can get money, but it is a place where you can learn, change and challenge [yourself].

Today, Abu runs his own pharmacy in Sana’a, which he began in July 2017. Through the Ganati Pharmacy, Abu can now offer jobs to others in his community – a miraculous achievement given his original misgivings about a career path in medicine. In the coming years, he plans to get married and further develop his business.YEFE’s healthcare program proved much more than vocational training. With new skills to secure his future, Abu moved from crisis to purpose.