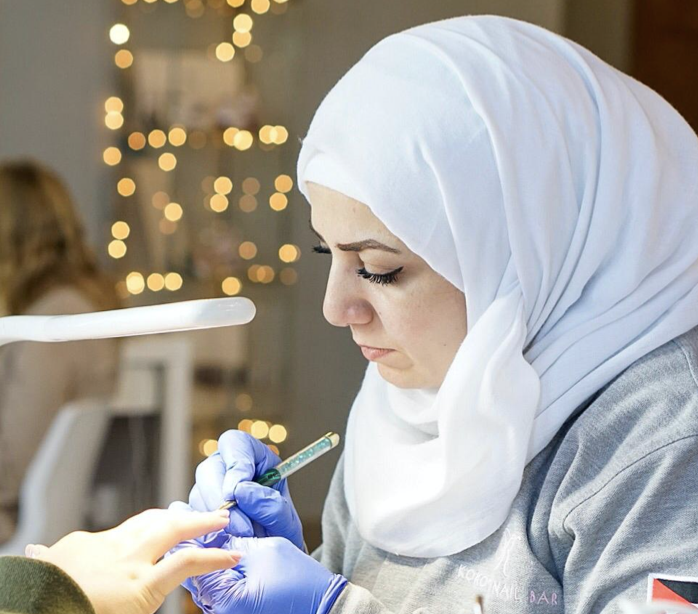 EFE changed my life. They gave me the luxury of envisioning a better future. Thanks to them, I now have the financial independence I have always been dreaming of.

33-year-old Abeer is vibrant and optimistic. Seeing her today, you won't believe that she is the same young woman who once fled the terrors of war and desperately wondered how to support four children on her own.

Fleeing Syria in 2013, Abeer faced the bitterness of being uprooted and becoming a refugee in a foreign land. Her life before had been painful as well: at the age of 15, she was forced to leave school to marry. By the time she fled Syria, she had four children. The transition to Jordan took a toll on her marriage, and eventually, it became too much to bear. She and her husband divorced in 2015 – leaving Abeer with four children to support.

This was Abeer's reality: she was now a single mother with a ninth-grade education and no skills for survival in a country that was not her own. Anxiety and depression started to creep in, but Abeer wanted to give her kids a better life – something that could only be achieved if she had a steady income and financial independence. Abeer knew that she would need to learn a useful skill and land a job.

Abeer is a creative person and she hoped to find a job that can exploit her abilities. She began by taking multiple courses in sewing, embroidery, beading, and quilting. But even though her skills were expanding, she couldn’t gain employment or earn a steady income. Things were difficult, and Abeer started feeling hopeless. That's when she learned of Education for Employment (EFE).

In the beginning, Abeer was scared and skeptical – she didn't know if another training program would lead to success or become another failed attempt. Her friends stepped in: they had taken classes with EFE, and seeing how the organization transformed their lives, Abeer decided to give it a go.

She applied for the Manicure and Pedicure course supported by USAID, and a couple of weeks later, she started her training. Abeer says "I knew that this training was going to be different from day one. The trainers started by teaching us life skills and techniques on how to build our self-confidence and succeed in the workplace. They really cared about us and wanted to see us thrive, we weren't just a number."

The training didn't just offer practical skills, it also helped develop her life skills. The course developed Abeer's interview skills and gave her tips on how to interact with customers. It also worked on developing her self-confidence and her overall wellbeing.

Within days of Abeer's graduation, EFE helped her find a job at a nail salon in Khalda, an upscale neighborhood in Amman. She now earns a steady income to support her children and she is hopeful for the future.

Abeer owes her success in her current job to the skills she learned during the course. She says "my previous training courses only focused on giving me practical skills. They never went into details on how to earn income from the skills I learned. What is unique about Education for Employment (EFE) is that they focus on teaching life and soft skills. The course taught me how to attract and retain customers."

After six years of just struggling to survive, Abeer can finally dream again. Her goal in life is to one day open her own nail salon and she plans on taking more courses to learn more about self-employment. "EFE changed my life. They gave me the luxury of envisioning a better future. Thanks to them, I now have the financial independence I have always been dreaming of."