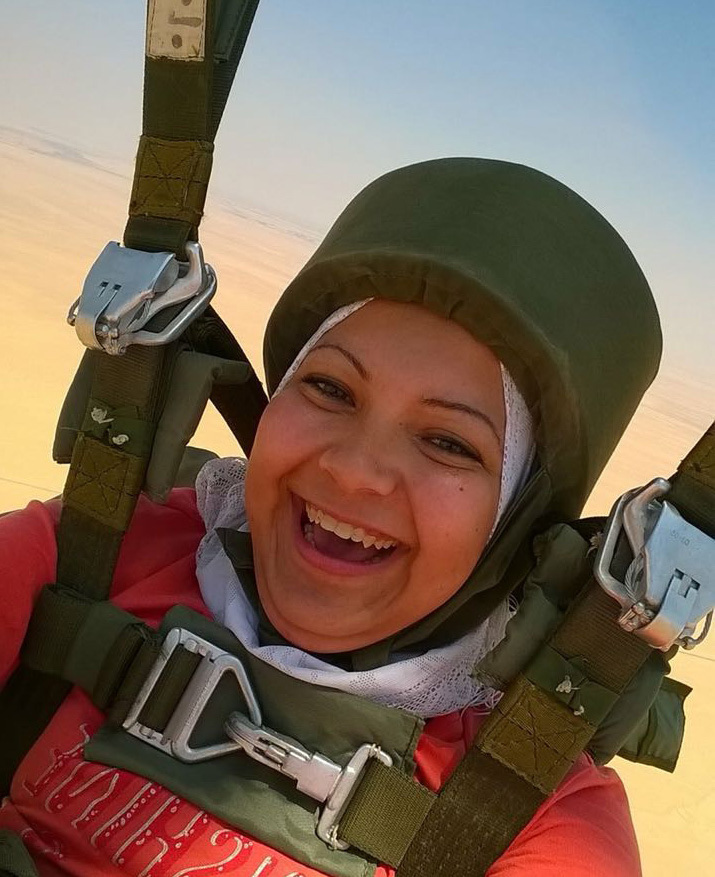 Women can do anything if we are given the chance. We are stronger than everyone thinks and nothing is impossible

Gehad Nabil is soaring – literally. As one of the first female Egyptian parachuters and a leader in private banking, Gehad is used to reaching high places both in play and at work. But it was not an easy journey.

Originally from Egypt, Gehad graduated with a degree in Business Administration from Ain Shams University. But after completing her studies, she struggled to find a job amid Egypt’s record-high unemployment rates. She knew the odds were against her: over 25% of young Egyptians are out of work, and it is one of the only countries in the world where the more degrees you earn, the less likely you will be to land a job. As a woman interested in a ‘man’s field,’ the challenges were even greater.

The job search was a dark time for Gehad. Like so many of her peers, she had ambition and ability, but little sense of how to market these to employers. Always persistent, she tracked down an organization to help her bridge the gap. In 2010, she enrolled in the Education For Employment (EFE) Banking Training Program held in partnership with Banque Misr, one of the country’s leading banks. For the first time, she learned the practical skills that she would need to thrive in the sector. When she graduated from the program, she walked away with more than a certificate: she had a job offer, too, from the global bank HSBC.

Starting at the bottom of the ladder as a Customer Service Associate, she raced up the ranks with two promotions in three years. Moving to Commercial International Bank (CIB), she spent two and a half years as a Senior Specialist in Business Banking for SMEs. Always one to go ‘above and beyond,’ she landed the Best Employee Award at CIB Egypt.

The job gave her more than a paycheck: it gave her the confidence to become a community leader. She promoted women’s role in society, joining the Girls Go Wheels Team in Egypt. Racing around Cairo on her motorbike, a mode of transportation typically reserved for men, she challenged the notion of what women should and should not do. She also volunteered to provide health and hygiene awareness to children in remote areas of the country. Gehad took up running, climbed mountains and learned to skydive, inspired by the desert adventure teambuilding exercises she did at EFE.

Driven by a strong sense of ambition, in 2015 Gehad made the biggest change of all: out of Egypt and into the UAE – one of the most competitive talent markets in the world. She flourished in her job as a Private Banking & Asset Management Relationship Officer at Union National Bank in Abu Dhabi, earning certificates like the CISI (Charted Institute for Securities & Investments) and more.

These days, she is a hero to her two sons and to the thousands of other youth and women who have heard her story on MBC, the largest broadcaster in the Middle East, or at EFE trainings, where she volunteers as an inspirational speaker.
In her own words: “All I need is the chance to fly.”