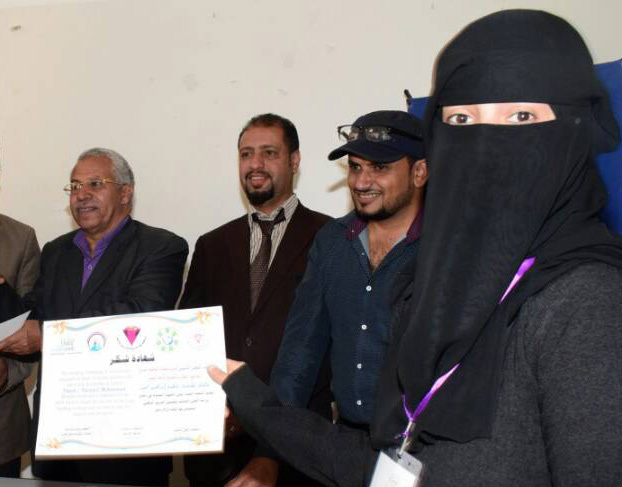 Since I have known myself, my life was full of obstacles and difficulties, I got married at early age before I finished my basic education. At EFE-Yemen I learned to never lose hope. Now with my job, my life has completely changed. I can spend on my children, my home, and myself. I’m finally optimistic.

Fatima Alraimi was only 32, but she felt much older.

As her hometown of Al Hodeidah receded in the distance, Fatima gathered her four children close. She tried to look brave as she recalled everything that had led to this moment. Who could have imagined that she would uproot her family and move – alone – to the capital Sana’a amid Yemen’s brutal civil war?

She thought wistfully of her childhood. Fatima had always enjoyed caring for others. She dreamed of working as a midwife and managing her own center to support mothers in her community. But she was married in her teens – before even finishing her basic education. She felt lucky that her husband permitted her to continue her studies – too many of her friends never had that option. She had glowed with pride when, in 2017, she graduated from university as a certified midwife.

Fatima had just given birth to her fourth child as the war ravaging Yemen escalated. What few jobs were there disappeared – including the one that had enabled Fatima’s husband to keep their growing family afloat. The inevitable happened: he had to travel abroad to find work. Left on her own to provide for her family’s basic needs as the war intensified, Fatima desperately looked for a job. She sent her resume to as many hospitals and health care centers as she could find. But, the response was always the same: “you don’t have enough experience.” She had never felt so hopeless.

The bus lurched and jostled her into reality. Looking at the rocky crags as they climbed towards Sana’a, there were too many unknowns to count. She was sure of just one thing: she had to find work.

Fatima looked at the clock on the wall. How was it already noon? There was so much to do! As she strode confidently down the hall at Almawadah Hospital, she thought about that bus ride months before when she arrived in Sana’a. Everything had been uncertain then. How much life had changed.

It had all started with the announcement she found for Education For Employment-Yemen, which was offering a healthcare training program supported by the U.S. Department of State. It was just what she needed. She applied and dove into the training, learning the technical English and soft skills she would need to navigate a hospital setting. She even learned basic IT skills. That’s when she started to see a glimmer of hope.

That glimmer grew stronger and stronger during the final portion of the program, a two-month technical apprenticeship in a local medical center. She finally had the chance to apply her knowledge and gain the experience that employers always wanted.

Growing more confident by the day, she had applied for a job at Rawafed Institute as midwifery trainer and was accepted. The feeling was indescribable - all she wanted was to hug her children and tell them be proud of their mother. They would no longer be deprived of anything, she would make sure of it. Then came even more good news: she’d been accepted to an additional job as a midwife for Almawadah Hospital.

As she turned to her next patient, Fatima smiled. After so much darkness, she was finally in the light.

Fatima has continued to rise, and today she oversees not only patient care, but also the management of a medical facility - from accounts and billing to hygiene and staffing. Her husband is jobless and she is now the sole breadwinner at home, supporting both her own family as well as her in-laws.

Fatima has become a community leader. She helped to establish a national organization that has received government accreditation and aid from over 40 international and local partners for its work providing psychosocial support to Yemenis impacted by the war.